To Hull and Back

Two teams separated by a river, connected by a bridge, and divided by a vitriolic hatred. The Humber Derby is an explosive affair… 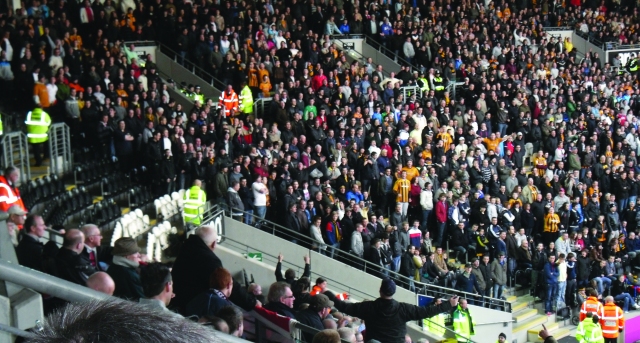 There is a thin layer of smog hanging over Hull City’s KC Stadium. A lingering smell of smoke tickles the nostrils, a pointer to the Bonfire celebrations of the night before. The stadium is empty, save for a handful of fluorescent jacketed stewards.

By three o’clock this afternoon it will be packed full, and there will be more fireworks.

There is an air of tension palpable today; Hull City are a club in decline having failed to cope with relegation from the Premier League last season. They are currently embroiled in another relegation battle, and have failed to win any of their last 5 games, including two consecutive home defeats.

By contrast, fierce local rivals Scunthorpe have been in excellent away form this season and have a third win on the road in a row in their sights.

By quarter to three, the stadium is almost full, and the supporters are in good voice. They bait each other by singing abusive chants that refer to the high amounts of unemployment and drug use in their respective home towns.

“You’re just a town full of smack-heads”, sing the Hull faithful, while The Iron supporters respond with “you’re all on benefits”.

The Iron fans have travelled in great number and rally behind their team.

Hull left-back Andy Dawson used to play for Scunthorpe, and bares the brunt of the early abuse, as The Iron support insinuate that he is of questionable parentage.

A couple of fans from each side attempt to breach the police cordon that separates them, but are quickly repelled.

Despite the action in the stands, the first half is forgettable as neither side gain a real foothold in the game, and it remains goalless at the break.

As the supporters drift into the concourse to top up their alcohol levels, the half-time interval passes and the teams re-emerge onto the pitch for the second half.

The rival fans resume their battle, and one Scunthorpe supporter launches into an expletive filled tirade against his Hull counterparts, spraying pie all over the place in the process.

The second half is much more lively, and Scunthorpe left-back Eddie Nolan earns himself a yellow card for an over-zealous protestation at the linesman. The Hull fans call him a “rent boy”. Nolan incenses them further by laughing in their faces.

Moments later, Hull’s Liam Rosenior is flattened by a challenge but receives no free kick. When Rosenior finally gets to his feet, the Scunthorpe fans chant “now who’s the rent boy?”

It’s tit for tat both on the pitch and off it.

Suddenly the game explodes into life. Scunthorpe captain Cliff Byrne is left bloodied and furious after a challenge by Nick Barmby, who escapes without caution.

And then Scunthorpe begin to take charge. Spurred on by their boisterous support, they carve out some excellent opportunities, but fail to make their pressure pay.

Martyn Woolford comes the closest to breaking the deadlock as he cuts in and fires an angled shot which comes back off the post.

All of a sudden the KC Stadium becomes edgy and quiet as the Hull fans fear another defeat.

“Just like a library” comes the chant from the away enclosure.

Scunthorpe continue to press but they are foiled on numerous occasions by Hull goalkeeper Matt Duke, and it looks as though their pressure will count for nothing as the score sheet remains blank.

All of a sudden, Hull seem to find something in reserve and it’s their turn to ask questions of the Scunthorpe defence.

Richard Garcia has a great opportunity to open the scoring but is foiled by an excellent save by Iron ‘keeper Joe Murphy.

Then James Harper finds himself in acres of space just eight yards out, and bares down on goal. There are five minutes remaining and it’s a golden chance to win the game.

The Hull support rise to salute the impending goal, but Harper inexplicably side-foots the ball tamely into the hands of the grateful Murphy.

The Scunthorpe support are incredulous at their side’s good fortune and the Tigers’ toothless attack.

As the clock ticks over into the final minute, Scunthorpe create a final attack.

Nolan finds West Ham loanee Freddie Sears on the edge of the box, and he cuts the ball back to Michael O’Connor who runs onto it and volleys in the winner.

There is pandemonium in the away stand as the supporters go ballistic. Arms flail, shirts are whirled above heads. The Hull fans are dumbstruck. Some take their anger out by hurling objects at The Iron fans.

Skirmishes break out in the corner as the volatile atmosphere reaches boiling point.

The home stands empty at an incredible speed, and the raucous Scunthorpe fans salute their manager Ian Baraclough.

The final whistle signals more jubilation in the away end, and Baraclough milks the moment, punching the air with delight.

As the supporters finally trickle out of the KC stadium into the chilly Hull night, there is unbridled joy on the trip home for the visiting fans, who will celebrate long into the night.

The Hull supporters bemoan their side’s plight, but it’s Scunthorpe who deservedly hold the bragging rights for at least three months, when the sides will meet again at Glanford Park for the return fixture.

1 Response to To Hull and Back