The January transfer window has long been castigated by football managers across the country and indeed the continent as being a time for impulse buys and inflated prices. At 11pm last night, the 2011 window slammed shut having provided arguably the most intriguing deadline day in history.

With the dust still settling on the extraordinary day’s business, let’s take a look at some of the bigger moves…

As the nation woke up, managers up and down the country were already busy making calls and sending e-mails, trying to bring players in and ship the deadwood out of their clubs. And while many players made last-minute moves, the entire day’s business was overshadowed by the sensational deals concluded by Liverpool and Chelsea.

In addition to the arrival of Torres, Chelsea also completed the protracted signing of Benfica defender David Luiz, taking their day’s spending to almost £80 million. And all of this on the very day they announced a loss of over £70 million over the last year.

These two signings offer a statement of renewed intent from Chelsea’s oil-rich owner Roman Abramovich; this is the first time he has provided such vast funds for transfers since the end of the Jose Mourinho era at Stamford Bridge.

Luiz is a physically adept defender and as is customary for Brazilian footballers, is technically gifted with the ball at feet. He has four national caps for the Selecao, though the mind still boggles at his reported price tag of £26.5 million. That sum is dependant on a number of clauses throughout Luiz’s contract, although most of it will be paid up front.

Even so, that figure pales into insignificance when compared to The Blue’s sensational capture of Torres from Liverpool.

Chelsea’s admiration of the Spanish World Cup winner had been no secret, but the deal unfolded slowly as the two clubs eventually agreed a £50 million deal yesterday and Torres put pen to paper with the 11pm deadline creeping ever closer.

There is no doubt that Chelsea have signed a world class player here, although Torres’ form has been patchy this season. He looked a folorn figure under Roy Hodgson earlier this campaign, though the return of Kenny Dalglish to the Anfield dugout appeared to spark new life in the Spaniard; he scored three goals in his last four appearances for Liverpool.

If Chelsea can get him firing to his full potential, Torres will undoubtedly score the goals that bring more success and silverware to Stamford Bridge. Any team that can boast a frontline of Torres, Didier Drogba and Nicolas Anelka will always be in the hunt for honours.

In an intriguing appendix to the story, Torres looks set to make his Chelsea bow on Sunday; against Liverpool. A fiery match that will no doubt be- especially given that some Liverpool fans were seen burning shirts with Torres’ name emblazoned across the back after his departure yesterday.

Of course, that move left a significant hole for Liverpool to plug, and the Uruguayan striker Luis Suarez completed his transfer to Anfield from Ajax, subject to a work permit being granted.

Suarez offers a potent goalscoring threat, having struck more than a goal a game last season for Ajax (he scored 49 goals in all competitions in just 48 appearances). Suarez also proved he is capable on the biggest stage of all, scoring three goals at the World Cup in South Africa in 2010 as Uruguay reached the semi-finals. Despite that return, Suarez is remembered most as a villain for his deliberate handball in the quarter-final against Ghana that prevented the African side a last-minute winner.

But it wasn’t Suarez’s arrival on Merseyside that caused the biggest shock; that honour was left to the Newcastle striker Andy Carroll.

Liverpool parted with £35 million for the services of Carroll in one of the most incredible pieces of transfer business in modern football history.

Massive: Andy Carroll's transfer to Liverpool was a huge surprise accompanied by an even bigger price tag.

Indeed, this player, who has just one England cap and relatively few Premier League appearances, traded clubs at a price that made him the most expensive British footballer ever, and the eighth costliest player in the history of world football.

Though Carroll’s performances for the Magpies have been of excellent standard this season, that sizeable price tag only lends weight to the theory that January is a month of panic buying and overexuberrant spending in the world of football.

Despite his good performances though, there is simply no way on God’s green Earth that Andy Carroll is worth £35 million. Not even close.

Okay, he is young and hungry, he’s homegrown, and he has plenty of time to develop into a top class player; but this is a man who didn’t even top the goal scoring charts in the Championship last season.

A man who, for all his talents on the pitch, seems to have a dubious lifestyle off it. Reports suggest he is fond of a night on the town, and he was convicted of an assault last year, and as a result was ordered to live with Newcastle club captain Kevin Nolan.

In addition, Liverpool appear to have taken a huge gamble on Carroll, given that he is currently sidelined with a thigh injury that may yet keep him out for a couple of months or so. To pay such a gargantuan fee for a player on the treatment table is a little odd to say the least.

It’s also important to take into account the pressure that Carroll will find himself under once he does pull on the famous red jersey.

At Newcastle he has done well; but then he was always going to have that chance. He had come through the club’s youth academy and was a Newcastle supporter. He was adored by the Geordie fans because he was one of them. It was a classic story of local boy done good.

Now, Carroll’s performances must justify this price tag that will initially feel like a mill stone that he will carry around his neck. Perhaps even a couple of goals early into his career won’t ease the pressure; the Liverpool faithful will surely expect miracles given that Carroll has become the club’s record signing.

For a man with no European experience and indeed only a fledgling Premier League career, £35 million is a simply astonishing amount of money. To put it into perspective, Barcelona paid £800,000 less than that for David Villa; widely regarded as the deadliest finisher in world football, and a World Cup and European Championship winner to boot. 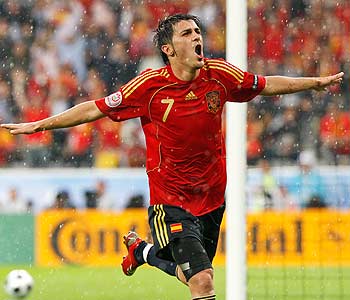 After such an extraordinary day’s transfer business yesterday, it begs the question: when will the first £1 billion transfer happen? Obviously it’s some way off yet, but if teams keep parting with these astronomical amounts of money for players, it may well be sooner than many people think. Could it be that the first £1 billion player has already been born?

With the UK economy continuing to suffer, many have criticised the clubs for splashing the cash in such a lavish manner but this will always happen in football. If a team wants to sign a player, invariably they will do all they can to make sure they get their man.

The January transfer window only serves as a reminder that football is increasingly about wealth and financial clout.