My favourite sport to play: Football.

But what about when these two vastly different ball games combine to form a new sport? Football and golf? Together? Yes. Footgolf exists, people.

And last weekend, myself and a few of the lads decided to try it out. Here’s the story of our Footgolf adventure. 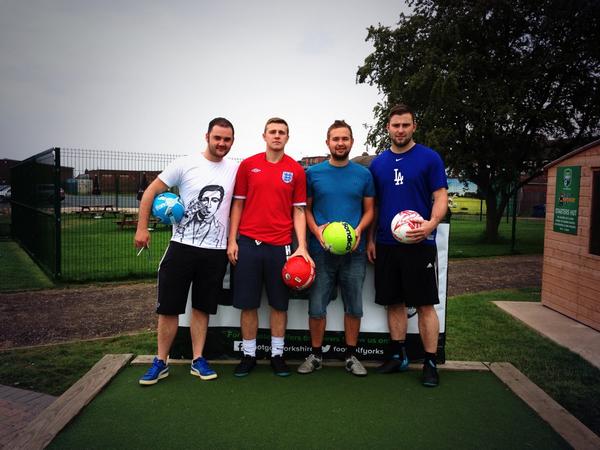 Footgolf debut: Me, Jig, Daz, Mark. That’s a pencil in my hand, not a cigarette.

What is Footgolf, though?

First things first, what the hell does this game entail? Well, you may be surprised (or not) to learn that it’s basically every man for himself. Select a football, kick said football into the designated hole in as few shots as possible.

It’s essentially a little pitch and putt course. The holes vary in length and layout, with tree hazards, undulating terrain and some bunkers to contend with.

Basically, golf. But with a football. And using your feet instead of a club.

Where can I play Footgolf?

We played in Hull. But there are courses all over the place, and seemingly abroad, too. You can check out this map to find out your nearest Footgolf course.

So, onto our Footgolf debut.

Our exertions started early, with various predictions as to the winning player, which of us would get a hole in one, who’d end up in which hazards (“Jig will be in the soup” was a common forecast).

Cocksure and supremely confident, I laid my predictions bare for all to see early on Saturday morning with this chillingly prophetic Tweet.

On arrival in Hull, we eventually located the One Stop Golf centre (no help from the directions provided by the dozy mare on the sat nav). Ten quid a man in the pot, the rivalry intensified. Winner takes all.

I decided to fuel up with a warm sausage roll. This would prove to be the first of many mistakes. Too. Much. Stodge.

We paid for 18 holes; perhaps slightly hoodwinked as it turns out there are only 9 holes. So… our round meant two trips round the circuit. But as we were new to the course it wasn’t a huge problem.

Having selected our footballs, we were asked by our guide for a photo opportunity, amateur level footy heroes that we are. Eyeing up the 18-hole course record (a score of 41 we were advised), we confidently placed our balls on the first tee.

With that, we were advised of the course rules. With an emphasis on the “NO SWEARING, UNDER ANY CIRCUMSTANCES, OK GUYS?” rule.

And then we were left to our devices. Up stepped Mark…

Hole in one. First shot. Hole in bloody one. Cue wild celebrations by the man himself, while the rest of us instantly broke the no swearing rule with a riotous chorus of “FUCK OFF!”

Everyone else parred, apart from me. First shot in the bunker, poor recovery. But… you don’t need any more details.

Basically, I was terrible all the way round. I didn’t have any proper football based footwear. Which was another mistake. Also, choosing a ball that went flat half-way round wasn’t wise either.

But enough excuses. Mark got another hole in one, this time on the second to longest hole (the eighth). A swerving, dipping, curling tee shot just went on a total adventure of the turf and ended up casually dropping into the hole. More celebrations and swearing.

At the half way point, Mark led with breathing space, while I lagged. My back 9 improved considerably, but it wasn’t enough to stop me collecting the wooden spoon (later leading to this frightening admission of my performance).

Actual list of people who got rinsed at #footgolf: @cmacd57 #fml

Mark had a couple of nightmare holes, and Daz put together a solid run to steal the glory and the prize pot.

All in all, a good day. But a terrible realisation that I’m more golf than football at Footgolf. AKA: Shit. I actually more than doubled the course record. Which is embarrassing.

Also, there’s a bar at the end. So you can celebrate victory (if you’re Daz), or bemoan your misfortune (ineptitude) (if you’re me).

We’ll go again, next time with a few more of the boys to increase the banter levels a bit more. And then maybe I won’t come last.

Journalism student at the University of Lincoln. Come from Scunthorpe. Interests: Football, music, socialising.
View all posts by cmacd1989 →
This entry was posted in Football, Opinion. Bookmark the permalink.